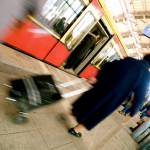 Transportation for Aging In Place

Reliable transportation plays a key role in aging in place successfully. Access to buses and trains is especially important for seniors who can no longer drive.
But finding that sort of transit is likely to get more difficult, according to a recent study by the Center for Neighborhood Technology (CNT), Chicago, Il.

Its report, Aging in Place, Stuck without Options, indicates that by 2012, more than 15.5 million Americans aged 65 and older will live in communities where public transportation service is poor or non-existent.

The CNT study analyzed metro areas in five size categories and ranked them by the percentage of seniors with poor access to public transportation both now and in the future.
Among the findings:

The study is a terrific reminder of how important it is to consider transportation options when you’re shopping for retirement neighborhoods and for houses or condos.

One online tool that can be particularly valuable when you’re assessing various cities and specific addresses is Walk Score. You plug in an address and the site measures the walkability of any address and rates local transit options. As an example, if you type in an address in Lincoln Park, a Chicago neighborhood, Walk Score tells you that the area is a walker’s paradise and gives it a 90 out of 100 in walkabiltiy. It also says that it has excellent public transit access. Encino, Calif., on the other hand, only scores a 38 on walkability, and the site labels the city car dependent.