Middle aged parents with post-graduate children are talking about it, so are Seniors: The benefits of boomerangs. The term boomerang originated when college students who had moved away from home to go to school then came back to their parents homes to live while they found jobs and built their nest egg for future independence. Just like the Australian toy that comes right back to the thrower after it’s tossed into the air. 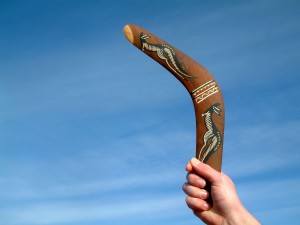 With nearly 20% of the population now living in multi-generational households, the exciting news is that there really are benefits to be had by everyone involved in multigenerational living. Gone are the days when we assumed a boomerang was a lazy child who didn’t want independence!

When your kid decides to move back in with you and you end up returning your home office to a bedroom, know that you’re not alone.

It turns out that you have 57 million other Americans or 18.1 percent of the population in the same boat. That’s according to a study by Pew Research. Between1980 and 2012 the number of people living in multi-generational households doubled.

Homebuilders have recognized the trend and now are offering houses suited to the unique needs of multiple generations living under one roof. Among the builders are Lennar, Toll Brothers, and Youngquist.

Gregg Kantak, SRES® knows multigenerational living well, both as a real estate practitioner and because he lives in a multi-generational household. Kantak, a practitioner with Realty Direct in Largo, Md., and McLean, Va., shares a house with several family members, including his 80-something parents, his 100-year old grandma, a daughter, and a tween grandchild.

His living arrangement came about when the 55-year-old was planning ahead and thinking about downsizing from a multi-level townhouse to a single-story property.

At the same time his parents were downsizing, his grandmother in Florida had lost her husband and wanted to move closer to family, and other family members had felt the sting of the economic downturn.

Upsizing and having everyone live together seemed like a great solution to Kantak. His family agreed. So they all bunk together in a 6,300-square foot house on 10 acres in southern Maryland.

The arrangement comes with benefits for everyone, particularly for the seniors. Kantak’s grandma, for example, is being taken care of by loved ones and she can save money for a time when she may need skilled in-home nursing care. His parents sold off their house and socked away the sale proceeds for their future and they’re now able to travel a couple weeks each month.

Kantak, whose family members get along extremely well, sees it as an ideal arrangement. On the economic front, he says, “It’s ridiculous that we all have expenses and struggle when we could pool our money and have that combined wealth working for each other. We could all get a better quality of life together.”

Before they all moved in together, Kantak suggested a two-week staycation during which everyone lived together and did daily living activities – laundry, grocery shopping, going to the movies, and cooking dinner. “We wanted to see what ‘normal’ could be. The test-drive worked well,” recalls Kantak.

And it turned out that dividing up daily chores wasn’t a chore at all. One person liked doing laundry, another enjoyed meal prep, and another didn’t mind cleaning up the kitchen.

Multiple communal gathering spaces, including a living room and two family rooms, provide enough relaxation spots for everyone. The arrangement also solves troublesome aging-in-place questions. For instance, two first-floor master suites with their own sitting rooms address the seniors’ living needs. Kantak expects that one day he’ll occupy one of those spaces.

The other benefits of the lifestyle have nothing to do with money.

For one, multiple generations living together minimizes some of the intensive scheduling associated with caregiving because there’s always someone around to help Kantak’s grandma.

And rather than being at odds with one another because of a huge generation gap, Kantak’s grandmother and her great-grandson learn from one another. She imparts history especially well, according to Kantak, and he brings her insight into the modern world and a view of technology innovations.

“It’s also a wonderful way to instill in younger people that this – aging – is our future and it’s not to be feared, especially when you have this arrangement and know that someone you know and love, not a stranger, is caring for you,” Kantak says.