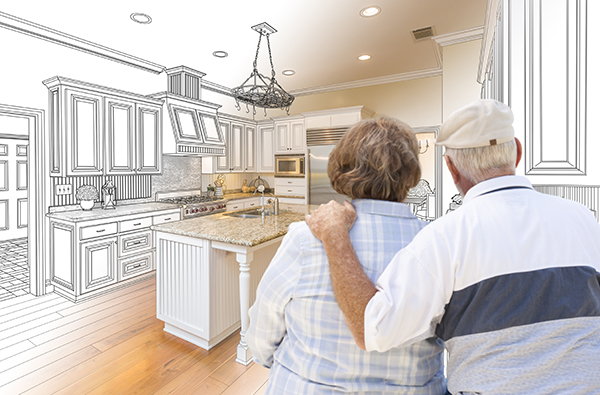 HomeAdvisor’s Aging-in-Place Report urges homeowners aged 55 and older to consider making upgrades to their homes now, to facilitate aging in place with less stress and cost than waiting until an injury or accident forces you to do them quickly and more expensively. These upgrades increase the comfort and functionality for every age, an additional benefit of doing them now!

What kind of upgrades can work for both younger homeowners and the elderly? Consider a built-in shower bench: Perfect for shaving legs or basking in the steam of a hot shower now, and great for seniors with balance issues later! Moveable grab-bars around tub and shower can keep ages 1-101 safer.

Also mentioned are smart-home advances that offer advantages at every age. Interested? Read more about home upgrades that will help you age in place later, below.

Thriving in Place for All

“I’m not old enough for that.”

Anyone who has encouraged a senior relative to make home modifications for aging has heard it.

And you already know the underlying challenge: Everyone wants to age at home, yet homes aren’t always well designed for aging.

Though 61 percent of homeowners over the age of 55 expect stay in their homes indefinitely, 78 percent have done no aging-related renovation projects.

Among homeowners who’ve never considered an age-related upgrade, 40 percent say it’s because they don’t have a physical disability requiring one and 20 percent don’t think they’re old enough for such a project, according to HomeAdvisor.

But too many people wait until after an accident or emergency to make home safety modifications.

So how about changing the way we think about and talk about housing and aging?

That’s one takeaway from HomeAdvisor’s 2016 Aging-in-Place Report that addresses myths and realities associated with aging in place, some of the projects that make homes suitable for aging, and the challenge of getting people to act.

Rather than talking about aging-in-place projects that people so resist, why not discuss incorporating features that contribute to the livability for all occupants and that later help everyone to age safely and comfortably?

The conversation, suggests the report, should be about helping everyone thrive in place.

Whether you call it universal design or user-centered design, the aim is the same and the conversation, suggests HomeAdvisor, should be about making homes more livable for all by adding features that enhance people’s lives and provide a return on investment through better livability.

So many upgrades, after all, serve dual purposes.

For instance, a young homeowner may enjoy a shower seat so he or she can bask in the steam and unwind after a long day.  Thirty years later, that same bench could help the person sit down when he or she feels unstable in the shower.

In addition, though some seniors view smart home technology as an expensive luxury, it actually yields tremendous benefits.